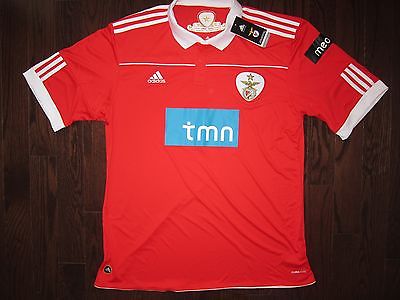 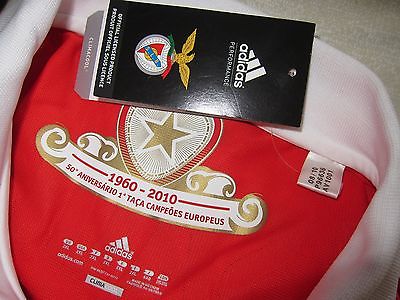 An unwanted gift that doesn’t fit me. Brand new with tags unworn official licensed Adidas Benfica Home shirt “Special Anniversary 1960-2010”, as worn during the season when the Portuguese side won the Taça da Liga and finished second in the Liga Zon Sagres. The team also reached the semi-finals of the Europa League where they missed out on away goals to rivals Braga. 100% polyester. Lightweight performance jersey. ClimaCool technology for ultimate comfort. Quality embroidery. Screen print graphics. Applied stripes on sleeves. Rib-knit collar. Tagless collar. A beautiful shirt with great detail and good provenance. Photos are of actual shirt.

Please check out my other eBay items on offer. We can do a deal

. Also, checkout my special page Crazee Football Shirts on Facebook for all the stuff that I ain’t found time to list here.

Founded in 1904 by a group of people led by Cosme Damião, Benfica is one of the “Big Three” clubs in Portugal – together with its rivals Sporting CP and FC Porto – that have never been relegated from the Primeira Liga since its establishment in 1934.  The team is nicknamed Águias (Eagles) for the eagle atop the club’s crest, or Encarnados (Reds) for the shirt’s colour. Since 2003, Benfica have played their home matches at the Estádio da Luz, which replaced the previous 49-year-old ground. Benfica is the most supported Portuguese club, the European club with the biggest percentage of supporters in its own country,and the world’s biggest club in membership terms.The official Benfica anthem, “Ser Benfiquista”, refers to the club supporters who are called Benfiquistas.

Hi there. I’m just getting rid of some stuff lying around the house to build my ratings again, since I lost it all when I moved to Canada from the U.K. I do combine shipping. Just ask first before paying and I’ll send a combined invoice. Buyers outside Canada, please contact me with your postcode to get postage rates to your country, if not already quoted. Also, buyer incurs customs excise duty and import tax etc, if any. I recycle packaging materials to try to keep costs low but postage these days is just ridiculous. *Sigh* Do contact me to resolve any concerns you might have before it all gets ugly. eBay used to be so fun. Let’s try to go back to the good ol’ days.